Pigments and binders in painting

Pigments and binders in painting

Pigments are the most important component of any paint. They provide the particular color tone. How are they used? 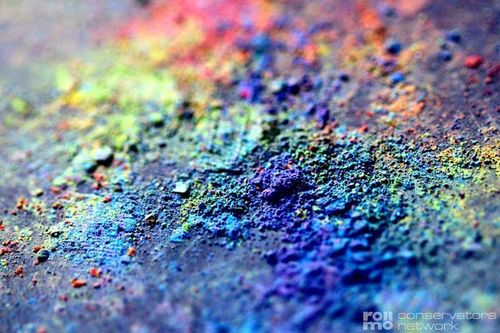 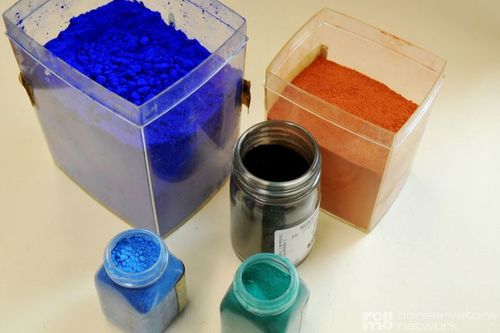 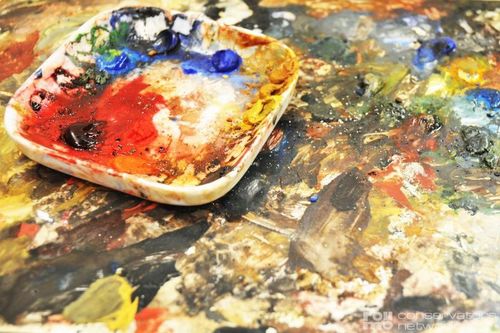 In a broader sense, a pigment is any powdery substance that, when mixed with a binder, gives a color its respective characteristic hue. Unlike a dye (used, for example, to dye textiles), it is insoluble in the binder and does not chemically bond with the substrate, but merely adheres to its surface.

The oldest pigments used by humans are found in the paints used for cave paintings - charcoal, ocher, lime and ground bone. The fact that these are also among the most durable types of pigments is one of the reasons for the excellent state of preservation of these paintings. In the wall paintings of Ancient Egypt, the palette was expanded to include some minerals, copper and other metal compounds, and the fresco technique was used for the first time, which is one of the most durable techniques.

In the painting workshops of the Middle Ages, the Renaissance and the Baroque, most of the pigments were produced by the painters themselves or obtained from pharmacies, and then they mixed the paints themselves. The exact processes were part of the trade secrets of the respective workshops and can sometimes still not be fully understood today.

It was not until the 19th century that it became possible to produce pigments synthetically on an industrial scale. This expanded the spectrum to include a number of color shades, such as phthalic blue and green, neon colors and a number of pigment effects. For example, metallic pigment effects can imitate the shimmer of gold or silver, or UV-active pigments light up under black light. It has also become possible to replace many expensive shades, such as ultramarine derived from lapis lazuli, with far cheaper chemically identical synthetic equivalents, or to find harmless alternatives for toxic substances.

The production of pigments depends on their chemical composition. The aim is always to obtain a stable, fine-grained powder that is insoluble in the respective binder. For this purpose, simple grinding is sufficient in the case of minerals (naturally or synthetically derived), and drying and sieving of the earth is sufficient in the case of earth pigments. An interesting hybrid between pigment and dye is Maya blue. Here a powdered carrier (clay) is dyed with indigo dye and the resulting powder is treated like a pigment in further processing.

Depending on the solubility in water of the binder, the pigment is first soaked in water for a few hours and then the respective binder is mixed in (for example, in the case of glue, acrylic and watercolor paints) or in the case of oil paint, rubbed with a glass runner on a glass plate with linseed oil and possibly other additives. Under no circumstances should pigment be stirred dry into already finished paint, as otherwise clumps form, so-called pigment nests, which burst when applied.

In porcelain painting, a glaze is mixed from glass powder, the appropriate pigment and a binder (usually oil) and applied to the white ware. During the subsequent firing process, the oil evaporates completely and the pigment is melted into the glass. This makes for an extremely durable product; however, due to the high heat involved in the firing process, only metal oxides can be used as pigment, which slightly limits the range.

In the fresco technique, a pigment soaked in lime water is applied directly to a fresh layer of unslaked lime, which encloses it in a resistant layer as it sets to slaked lime. Since lime plaster has a relatively high pH, only alkali-resistant pigments can be used - most suppliers of pigments also mark this on the respective product. The same applies to the use of gypsum in the paint, for example in the case of painting grounds made of gesso.

The resistance of pigments to heat, light and other factors varies depending on the type. Commercially available pigments are generally relatively robust and are also labeled by reputable suppliers in terms of their resistance and usability. The most stable are many mineral pigments, such as ochre, green earth and other tones based on iron oxide, copper and manganese.

Not all pigments are compatible with alkaline substances, such as lime-based paints used in fresco painting. Ultramarine blue, for example, must be replaced by cobalt blue, as it would decompose in an alkaline environment.

In the past, toxic substances such as white lead and arsenic green were also used in paints, furniture and wall coatings, with devastating consequences for the health of artists, craftsmen and residents. The harmful effects were accepted in the face of a lack of alternatives for the desired color shade. According to a rumor, Napoléon Bonaparte also died in exile on St. Helena from poisoning (possibly even deliberately used) by the arsenic green wallpaper in his bedroom. Since the industrial production of a large number of synthetic pigments, it has been possible to find harmless alternatives for virtually all toxic pigments. The chemical detection of a certain type of pigment can therefore also be an excellent indicator for the dating of a painting!

As a general rule, when restoring a painting, mural or other piece, the same pigment should be used in the same processing technique as the original. However, there are exceptions to this, such as highly toxic substances are often replaced by non-toxic alternatives, or the processing technique is sometimes modified for greater durability. 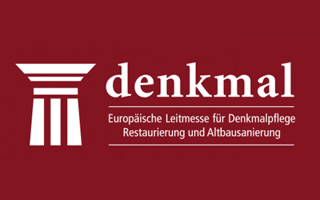