Glass painting serves as a generic term for a number of techniques for the design and refinement of glass, for example for church windows, lampshades, glass doors, mirrors or purely artistic objects. A large number of techniques are also used in glass restoration - the most important ones will be discussed below. 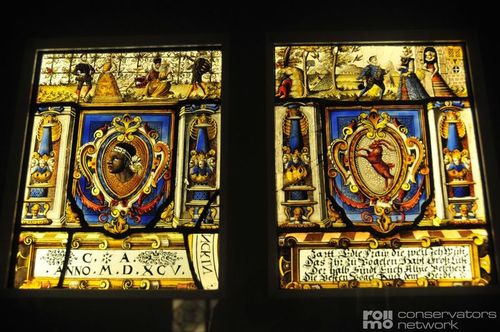 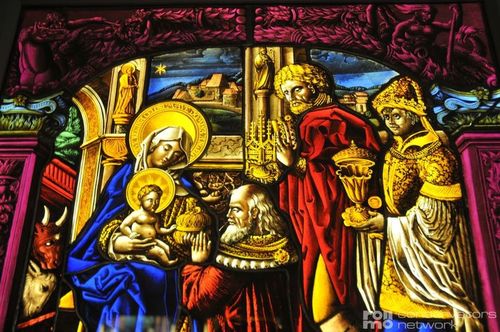 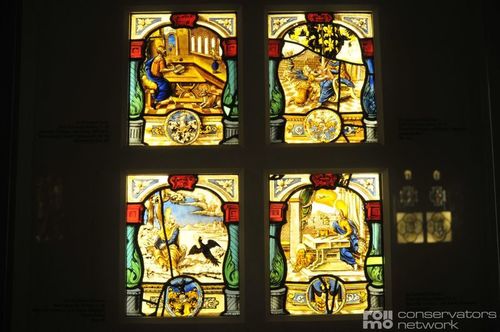 Glass may have been developed as early as about 7000 years ago in the Mediterranean region; the first documented finds come from Mesopotamia from the 2nd millennium BC. Soon, the first processing techniques emerged, which influenced the functionality, but also the aesthetic properties of the glass. For example, it was known very early on that colorless glass could be colored by adding certain metal oxides.

The design of stained glass windows was probably developed in ancient Persia and introduced to Europe by the Romans; from the early Middle Ages, techniques for partially coloring and painting glass surfaces were known. Stained glass reached a peak in medieval churches from the 12th to the 15th centuries, and again later in the 19th century under the influence of historicism. Very beautiful examples also exist from the Art Deco period and in more modern interpretations of the 20th and 21st centuries.

The design of a glass surface is usually conceived in such a way that a light source located behind the object - in the case of stained glass windows simply the daylight prevailing outside a building - illuminates the colored translucent glass. Stained glass, therefore, achieves an incomparably greater brilliance of color than any other art form; the images seem to glow from within themselves. Inside a building with stained glass windows, a special, numinous mood of light prevails, which is why they were and are very often used in sacred buildings to aesthetically emphasize the sanctity of the place. The stone and lead struts especially in medieval church buildings, born of technical necessity, create harsh contrasts between the brightly colored surfaces and the hard contours that cut through them, creating an impression of clarity and strict order.

The main techniques of glass design

Leaded glass as a traditional craft

Since no technique was known until modern times to produce large areas of glass for windows, for example, smaller areas of glass of different colors were joined together with rods of lead, whose U- or H-shaped cross-sections held the individual pieces in place. In ancient Persia, bars of carved wood had been used; however, lead glazing prevailed in Europe because it was easier to work with. An example is the bull's-eye panes of the stained glass windows of medieval homes or on churches.

Until the advent of enamel paints for application, which were not developed until the late Middle Ages, colored parts of leaded glass windows were usually solid colored, so it was not possible to have different colored areas on the same pane in a leaded glass window. All blue, green and red surfaces consisted of glass colored through with the help of metal oxides. The color palette was supplemented by black and yellow paintings - black solder and silver yellow - which could be applied and fired onto colorless glass.

Black solder, which existed as early as the 8th century, is a mixture of iron or copper oxide, ground glass, gum arabic and water. It can be used to create gray, brownish, and black shades; it was often used to create contours, fine lines, lettering, and chiaroscuro effects. The mixture is applied and then fired at 650°C.

Silver yellow, documented from the 14th century, is used to give a golden yellow color to colorless glass. It is the only substance that diffuses into the glass and does not just adhere to its surface. A mixture of antimony, silver sulfide and water is applied with a brush to a colorless glass sheet and also subsequently fired at 700°C in a kiln. The silver ions sink in and combine in the glass to form nanoparticles. Silver yellow is therefore very resistant to glass corrosion.

Enamel or ceramic colors consist of iron oxides for coloring, ground glass and lead, and a binder mixture that can be either aqueous (gum arabic in water) or oily (vinegar and thick oil in turpentine). Similar to the other two techniques, the mixture is applied with a brush and melted in a kiln at 600°C to 700°C. The glass is then painted. Here, the colored glass merely forms a layer on the substrate, which can be partially removed later by grinding, etching with hydrofluoric acid, or the like. The technique appeared in the 16th century and expanded the design possibilities enormously, since several colored areas can be placed next to each other on the same substrate. If a surface or an entire object is very evenly covered with a single enamel color, it is called overlay glass.

Very unique effects can be achieved by roughening or partially removing the surface layer of a glass object. A rough glass surface is almost as translucent as a smooth one, but opaque, which is why it can often be found on certain types of windows or lampshades. Cut or etched flashed glass allows for the selective combination of colored and white surfaces. Grinding also sometimes makes glass look similar to natural crystals.

Much of the restoration work is for medieval stained glass windows. Here, enamel colors are often affected by glass corrosion, and some windows have cracks or even holes. In the case of breakage, missing parts must be replicated and replaced; mere cracks can be glued almost invisibly. Not infrequently, replacement by replicas is also done preventively for entire windows. The same manufacturing techniques are used as for the originals. Often, a second, transparent window layer is applied to the outside of the building for protection, and the air composition is monitored to counteract further corrosion.

In terms of color effect and brilliance, objects made of glass are extremely durable - unlike works of art made of pigments and binders, there is no fading or yellowing. Also, the corrosion of enamel paints is less likely to cause the aesthetic effect to decay than in the case of conventional paintings. A variety of dangers that threaten works of art with an organic material basis - such as infestation with parasites, moisture damage, burning - do not occur. On the other hand, glass is an extremely sensitive material to mechanical influences and can easily break. The production process is highly complex and requires a comparatively high level of craftsmanship; in addition, a high degree of planning is required, which leaves very little room for spontaneity and serendipity in the process compared to other art forms.

Sacred buildings in particular are captivating with their ornate stained glass windows. Their elaborate design, combined with the small-scale work, has inspired for centuries. It was mainly Gothic architecture that produced such masterpieces. Accordingly, the work of restorers is of great importance in preserving these works of art for future generations.

The Crystal Palace in London

This is not a Gothic building, but one in the Victorian style. The architect Joseph Paxton designed it for the Great Exhibition of 1851, and the city had it moved from Hyde Park to the borough of Lewisham three years later. A fire completely destroyed the building in 1936. The name Crystal Palace was coined by a satirical magazine called Punch, but it applied perfectly to the opulent building. The entire facade, for example, consisted of large glass windows supported by an iron girder construction. Inside, for example, there were glass fountains.

The Cathedral of Chartres

This is a typical building of the High Gothic period. As early as 876, Charles the Bald consecrated a church on this site. In 1194, construction began on the building that still stands today. Visitors will find elaborately designed stained glass windows along with numerous details. Among all Gothic cathedrals, Chartres has the largest collection of preserved originals. It has over 10,000 figures in glass and stone and gives a comprehensive picture of the possibilities that glass art offered.

Germany also offers glass art for those interested. This includes the so-called Tucher's Annunciation Window, based on a design by Albrecht Dürer. It depicts the Archangel Gabriel and the Virgin Mary making the Annunciation to the birth of Jesus. The artwork comes from the house chapel of Dr. Sixtus Tucher, provost of St. Lorenz, who commissioned Dürer to design several windows around 1504. Much of this was lost when the property was destroyed in 1834. The remaining surviving windows are located in various places around the world.

In 2019, a disaster caused a worldwide stir: Notre Dame in Paris was on fire. The fire not only destroyed large parts of the historic building, but also melted the window glass. However, a ray of hope is provided by the fact that experts documented the individual windows well. One particular piece - the rose window - restorers can probably even restore without any problems, as it took only a slight damage.

Do you need professional restoration for stained glass or church windows?

Selected service offers and products on the subject of glass

SCHOTT RESTOVER® resembles window glass manufactured at the turn of the century. Its low thickness a...
SCHOTT TIKANA® - Restoration glass for the Bauhaus style

TIKANA® is particularly suitable for buildings in the Bauhaus style. Its slightly irregular surface ...